Support is a critical area of decision making when deciding to go with a new VoIP phone system. From an engineering standpoint it is most definitely needed on a post sale basis; first to get the system up and running and configured correctly, secondly to solve any problems or issues that rise along the way, and third to answer any questions the user may have about features and functionality of the system itself. In my mind, support options would be the absolute first consideration made when purchasing a system, and as a sales engineer I would like to give you a little insight on the Switchvox Support Options for its two phone systems, and why I have taken such a liking to its system and support team.

Switchvox has two software loads, a SOHO version of software and SMB Version of software. The SOHO version is designed to support up to 20 users, handle 10 concurrent calls placed in a small office, and is neatly outfitted in the new AA60 chassis. The SOHO software includes Silver Level Support only, and Switchvox institutes these cost on a per user level. The SMB Version of software is designed for a larger scale application, and can span up to 400 users, 75 concurrent calls, hardware redundancy, and supports options which include Silver, Gold, and Platinum level support. The SMB version can be neatly outfitted into any Switchvox hardware chassis including the AA60, and 3U Chassis–the AA350.

Support works on three levels for the SMB application and proves to be very affordable and less costly in years to come. The support packages are laid out below. 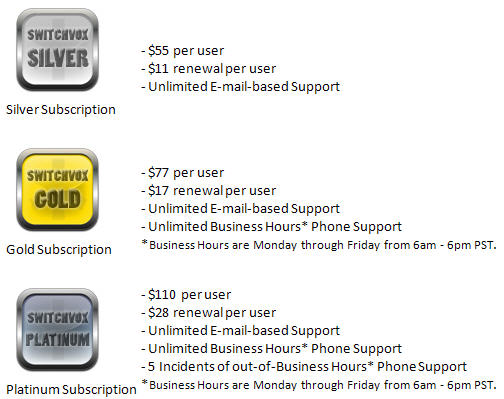 You may be thinking, wow this seems like a bit much. Let’s say I have a 50-User SMB System, and will need the phone support during normal business hours. That means I will be paying $3850.00 just in user licenses and support alone. You may think this a bit high in cost, especially when you add the costs of hardware, software, and endpoints to complete your new VoIP system. Let me ask you this: What are your current phone system costs per month? If you are using an older analog Legacy PBX, or even a proprietary VoIP system such as, Cisco, Avaya, Nortel, or Mitel, I can almost guarantee you every time, you are paying more in one year on support costs than you would ever pay in upfront costs of a Switchvox support contract. It gets even better though with Switchvox, after your first year of support, your costs from $77 dollars per user drops to $17 per user meaning you get the same level of support you receive in the first year of implementing your phone system for a fraction of the original costs. Let’s do the math for the second, third, fourth, and fifth year of owning your Switchvox SMB platform. A flat rate support cost of $850 per year for 50 users. What a drop from $3850.00 in the first year, and you are still getting the same level of support and dedication from the Switchvox team.