Note: This blog post was updated on August 7th, 2018 to provide the most comprehensive and accurate information. The post was originally written by GARRETT SMITH.

We all know the capabilities and endless feature set of Asterisk. It’s a powerful, software-based PBX, that’s possibilities are endless. Asterisk is distributed in a number of ways, the first being the open sourced distribution that is command line driven. This distribution, 15.5.0 being the latest stable version can be downloaded from here for free, then compiled with a version of Linux, such as UBUNTU or Centos, and then administered from the command Line CLI interface.

The Flavors of Asterisk

Then we have your open sourced asterisk-based distributions freely available to the public for download. These versions would include trixbox CE, Elastix, FreePBX, PBXinaFlash, and Asterisk Now, which just names a few. The separator between these software applications as compared to the command line asterisk distribution is that while asterisk source code is running in the background, the majority of configuration changes can be made via a Graphical Web GUI interface from both a user and administrators perspective. These software applications also allow for asterisk cmd line access or CLI access in order to make changes if required. Companies such as these have taken the asterisk source code and “rounded” it to their own unique application.

And last but not least, we have our commercial asterisk based PBX’s. Most notability would be Switchvox SMB or SOHO software which is asterisk based, but no access is granted to the asterisk CLI. Rather all configuration changes are done via a web GUI interface. Software from Switchvox is considered a “paid” commercial product, which distinguishes itself from any of the open source based distributions mentioned above.

With all flavors of asterisk, each meets its own unique need and fulfillment in individual VoIP deployments. When it comes to purchasing an IP PBX, you have your choice of asterisk software and also hardware to go along with it. In all regards, whether you choose the free open source cmd line version of asterisk or pay for Switchvox’s award winning SMB software, all solutions present you with a powerhouse feature set and customizability to meet your unique business needs. A short list if asterisk’s feature sets can be found here .

Linux is a Dominant Force

Until most recently, the majority of IP PBXs being deployed were of an asterisk flavor based on a Linux operating system. While companies such as trixbox, Elastix, Switchvox, and many others have made great efforts to take the Linux programming piece out of the picture, the solutions are still Linux based meaning when it came time for your choice of hardware or server to run your asterisk solution, you needed to make sure the motherboard and peripheral components were compatible. See my previous blog posts relating to Open Source Hardware Requirements for more information. If you were not designing your own server platform, of course you could always purchase a Switchvox appliance for your SOHO or SMB solution, or a Rhino or Phoneboch’s appliance preloaded with your desired version of trixbox CE, Elastix, or other open sourced based software. This, however, adds to the cost of your solution.

For the following comparison, I would like to focus on Switchvox SMB software and its comparisons against a new Windows-based PBX, 3CX. The reason for this is that both solutions are “paid” commercial software based applications. Pitting these 2 up against one another would make the most sense from a cost, feature set, and positioning standpoint, so onward to the comparisons. 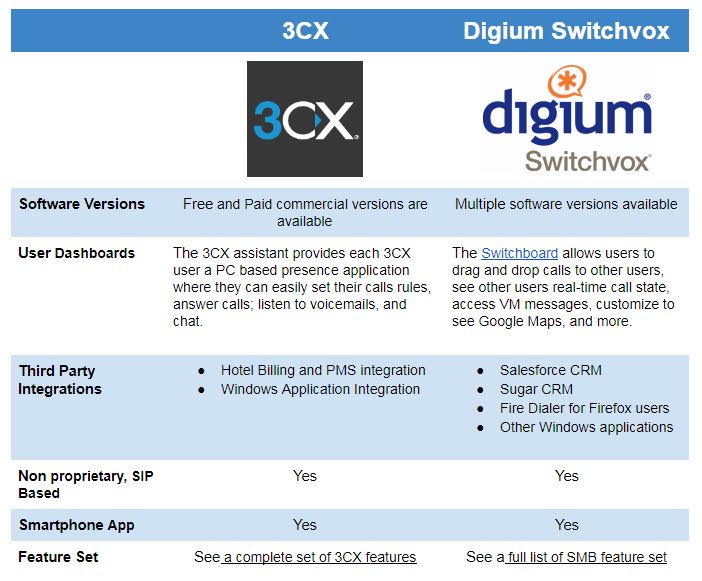 3CX is a Windows-based IP PBX platform that is becoming very popular in the VoIP world. A few benefits of 3CX include:

Now onto the Switchvox SMB platform.

So what do you think? Cost aside, which one would you choose and why?