Simply put: Trivial File Transfer Protocol (TFTP) is a no-frills method of moving files from one place to another. There’s no authentication, and there’s no encryption. It is, however, one of the most common ways to place a select version of firmware on a phone, and for our discussion, a Polycom phone.

Why Polycom? Well, it’s the golden standard by which we measure all other phones. Also, because it has the most confusing firmware.

So, why even bother changing firmware?

Well, you might not need to. However, we may change firmware on a phone for a few reasons:

Typically, upgrading your phone system will require a phone firmware upgrade. Documentation might suggest making a phone firmware change to leverage a new feature. If you are an installer, or integrator, and want to be good at your job, always read your system’s firmware release documentation.

How to Upgrade a Polycom (Poly) Phone Firmware

Let’s get down to business. First, install a TFTP server.

Luckily, most TFTP servers are free, just like the best things in life. We recommend the one from SolarWinds.

After installing, open the TFTP server.

Next, download the recommended firmware from Polycom. Double check your documentation for the correct version and also check your bootrom version currently on the phone.

Bootrom is code that is run when a phone first starts, and it executes the actual firmware. Older bootrom versions will not always be compatible with newer firmware, so when downloading from Polycom, make sure to RTFM (Google it if you don’t know) before proceeding with an upgrade because you end up in a boot loop. Luckily you should be provided with the correct bootrom file for the intended firmware version.

Extract the files you downloaded into the TFTP root directory, which is indicated on the bottom of the TFTP server window. Make sure the firmware files AND the bootrom file in included in the root directory to avoid any mishaps. 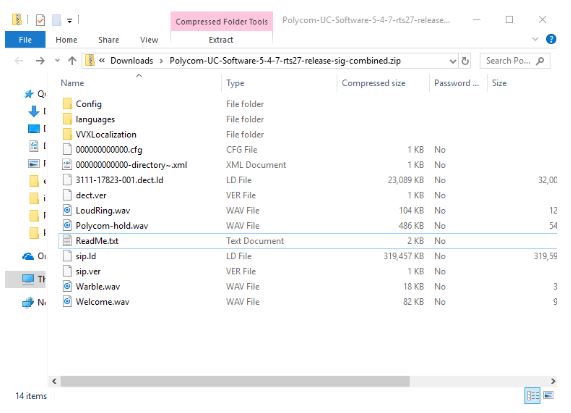 You’ll also notice that there are two types of downloads, combined, and split. Combined is a single universally accepted firmware across a range of phone models. The split has the firmware broken out by phone model. The split will load faster due to the files being much smaller.

Now configure your Polycom phone to connect to the TFTP server:

Multiple phones may upgrade at once, but if you are using the combined firmware, you could experience a much-delayed process.

Also keep in mind that because TFTP is an extremely unsecured protocol, you’ll want to keep these file transactions on your local network.

Thanks for reading and happy VoIPing!