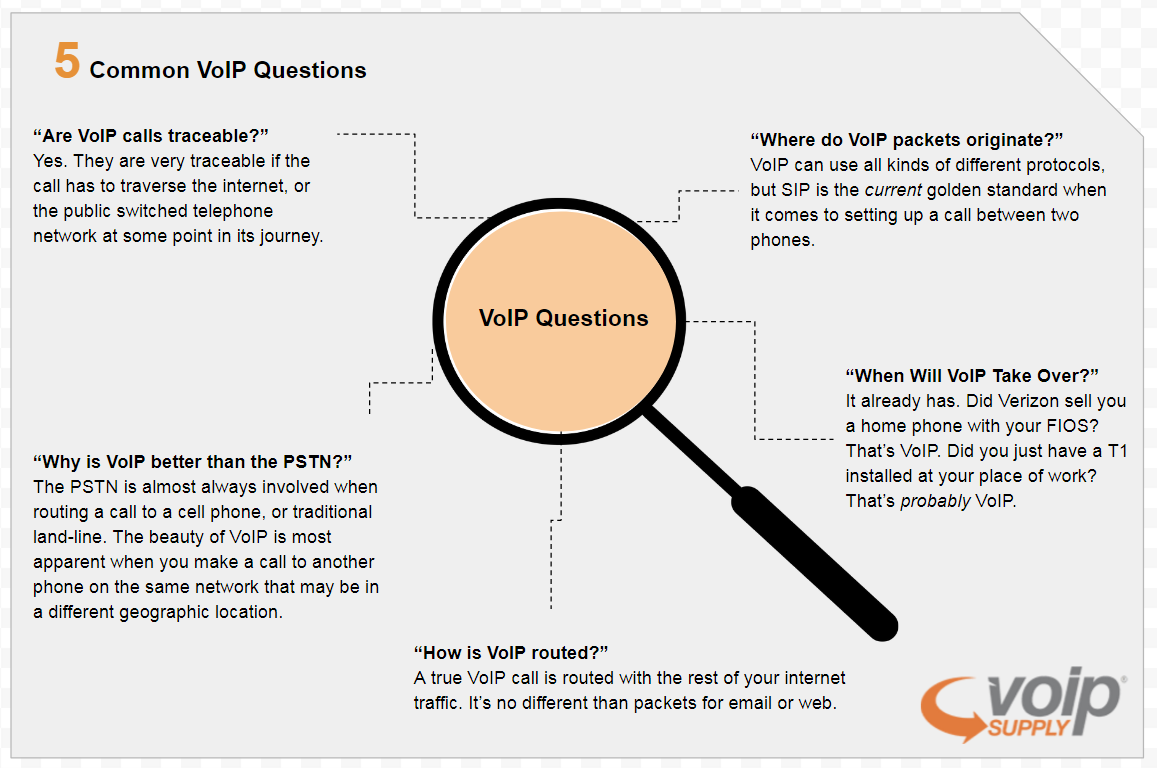 As consumers, users, hobbyists, and VoIP professionals, you have a lot of questions, and we’d love to answer them all. But, we can’t answer them all. At least not all at once. So to get started, the marketing department sent me a list of regularly searched questions that have to do with VoIP that I can answer.

Yes. They are very traceable if the call has to traverse the internet, or the public switched telephone network at some point in its journey. You can’t do anything on the Internet without some sort of digital trail being left behind.

Sure, you can surf with what’s no being called a “VPN”, which is just a way of securely proxying your traffic to someone else’s server, but whoever operates that server has a record of all of that traffic. And, who knows how secure their infrastructure is, and to whom they share it with. Carriers collect call data not only for the “greater good”, but also for improving service quality, monitoring, and it helps to troubleshoot issues that arise in the world of hurling packets and multiplexed signals across the world. If you want to be untraceable, you can attempt to use a “security through obscurity” method, but that’s not ever what a professional does, and is really just an indicator of nefarious activity.

Frankly, if you’re wondering about traceability, you’re missing the point. What you want is encryption. If you want to have a secure conversation, do this:

Do it in person, where no one is around, or use SRTP and TLS with your own generated certificates. This should preferably be across an actual VPN too. Despite its name, OpenVPN might be your best bet. It’s still totally traceable in terms of a source and destination, but your media (audio) is encrypted, which is really the important thing.

Where do VoIP packets originate?

VoIP can use all kinds of different protocols, but SIP is the current golden standard when it comes to setting up a call between two phones. In basic terms, the caller, sends an INVITE to the callee, to which sends back a 200 OK. Then, the caller sends an ACK to finish the three-way handshake of SIP.

Once the SIP handshake is complete, then the media (RTP) can flow between the caller and callee.

When the call is completed, the end hanging up will send a BYE to signal the other side that the call is over. The media then stops flowing, and the call is “torn down”.

Why is VoIP better than the PSTN?

For example, you take your VoIP phone with you on a trip to Singapore but need to call colleagues in New Orleans. As long as you have access to a network in Singapore that allows a VPN connection outbound, you can connect your phone (VPN enabled phones) back to the office in New Orleans and dial an extension, bypassing any international toll charges.

It’s worth nothing that this can be done without a VPN, but I’d caution anyone using a “foreign” network with any unencrypted traffic.

When will VoIP take over?

It already has. Did Verizon sell you a home phone with your FIOS? That’s VoIP. Did you just have a T1 installed at your place of work? That’s probably VoIP.

Companies like Verizon, Spectrum, and AT&T will install devices that translate SIP to a legacy interface like an FXS, or T1/PRI port. It’s called a SIP gateway. This allows you to use an analog phone or the T1 port on your PBX.

It’s a lot less expensive for carriers to utilize fiber optic networks to route IP traffic than to use the aging copper telephone infrastructure. It’s still in use but is quickly being phased out. VoIP isn’t just the way of the future, it’s already here.

How is VoIP routed?

In terms of leaving your phone system; a true VoIP call is routed with the rest of your Internet traffic. It’s no different than packets for email or web.

What’s important about VoIP in particular, and more specifically the audio portion of VoIP, is that it’s very time sensitive. You may not notice if a website takes an extra second or two or load, but that type of latency in a conversation is very noticeable and could make a conversation unintelligible.

In terms of inside your PBX, it uses a dial plan. A dial plan is a set of conditional rules that route the call to perhaps an extension, ring group, call queue, or auto attendant. Calls are routed by the dial plan by using parameters like the number that’s dialed, a specific caller ID, the time of day, or using skills based routing for example. Skills based routing occurs in a call queue that gives a certain priority to queue agents and may send more calls their way. In most Asterisk based phone systems, the dial plan is highly modifiable making the system almost infinitely configurable.