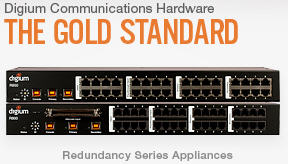 The newly released Digium R-Series redundancy appliances enable your network to recover from hardware or software failures and maintain communication with the outside world.

Digium failover appliances work with their open source telephony platform Asterisk to ensure that you have an open line of communication even in demanding enviroments.

There are two models in the R-Series.  They work on Asterisk based open sourced PBX’s but do not work on Switchvox.  Both models are 1U rack mount devices:

So even in the event of a catastrophic failure, your communications system will stay up and running with the Digium R-Series.  That sounds great but, what makes these appliances different from other redundant systems that work with Asterisk?

With the help of Digium engineer Pete Engler, here’s how the R-Series stacks up agains other popular appliances from Xorcom and RedFone.

The combination of Xorcom Astribank (HW Channel Bank) and Xorcom TwinStar (Software for redundancy) is a similar application to the Digium R-Series. Below are the main differences between using the R-Series and Xorcom for redundancy:

The RedFone gateways are another application where redundancy can be introduced to a customer location. By nature, gateways operate in a completely different manner than the R-Series for providing redundancy.