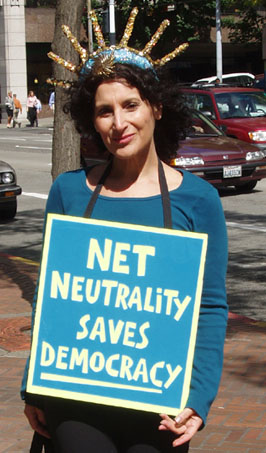 Whether you woke up this morning excited or disappointed, you should be pleased that an Obama presidency strengthens the cause for Net Neutrality, which is a good thing for the VoIP industry. Jim Higdon at VoIP-News wrote an excellent, comprehensive piece that touches on the implications of net neutrality for the VoIP industry.

Senator, now President elect, Barack Obama is a strong proponent of net neutrality. Back in June 2007, John McCain expressed his opinion and non-support for net neutrality.

McCain appeared at the All Things Digital conference in Carlsbad, Calif., and said he did not think government regulation of internet service providers to stop them from censoring, slowing down, or otherwise disrupting consumer’s access to the internet in order to stifle competitors or undesirable content was an appropriate solution.

“When you control the pipe you should be able to get profit from your investment,” he said, according to TheDailyBackground.com.

Later, McCain said: “I’m all for the government encouraging competition, but I’ve found over time that less government involvement is better.

In stark contrast….President elect Obama has positioned net neutrality as one of the cornerstones of his campaign platform.

Protect the Openness of the Internet: A key reason the Internet has been such a success is because it is the most open network in history. It needs to stay that way. Barack Obama strongly supports the principle of network neutrality to preserve the benefits of open competition on the Internet.

If you are interested in learning more about the Obama plan to support net neutrality, you can check out a podcast from then Senator Obama from June 2006 below.

Everyone who cannot pony up the cash will be relegated to the slow lanes.”