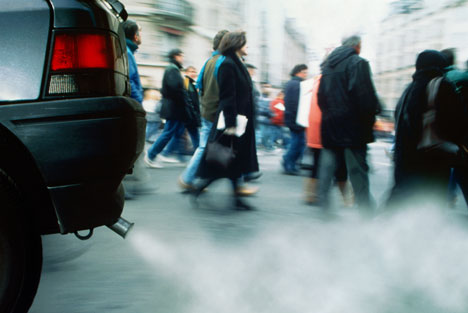 Two words, Gas prices. I won’t comment on those two words, in the interest of keeping this brief. Around here we’re paying roughly $4.25/gallon for the cheap stuff. I also won’t get into the Global Warming debate. A little CO2 never hurt anybody, but hopefully we can all agree that 411,000,000 Metric Tons of CO2 probably will hurt somebody.

My daily commute to the office, round trip, equates to 65.2 miles. I also have a vehicle that offers respectable gas mileage, around 35 MPG on average. Based upon my round trip commute, and assuming 260 working days in a year, that equals an annual commute of 16,952 miles in aggregate. Even with a vehicle that is well above the national average in terms of fuel economy…according to http://thehousingforum.com/ I’m still pumping out 4.25 Metric Tons of CO2 for the year….which sounds like a lot to me.

CAFE (Corporate Average Fuel Economy) guidelines call for an average MPG of 27.5 and US census data shows an average commute for a US worker is around 33 miles. I still see a lot of tanks on the road, and that 27.5 MPG is a generous estimate, but let’s go with it. Again, assuming you don’t take a vacation and you work 260 days per year, the average US worker contributes 2.74 Metric Tons of CO2 each year.

This story has already pushed the envelope of my mathematics skills, and I was having a difficult time extrapolating the latest US Census Data in order to determine the number of full-time employed workers in the US. A ballpark average seems to be around 150,000,000.

Acknowledging some potentially flawed math, that would place the annualized CO2 output for full-time US workers at 411,000,000 Metric Tons of CO2. I’m having a hard time visualizing that, but it’s impressive, and not in a good way.

Back to my original topic. There has been a lot of talk recently about increased interest in telecommuting due to upward spiraling fuel costs. The need for seamless telecommuting capabilities is one of the strongest arguments for adopting VoIP in the workplace. Greg Galitzine at TMC penned one of many articles I have seen recently estolling the environmental virtues of VoIP and telecommuting. I can tuck the IP phone from my office under my arm, take it home and plug it into my network and function pretty much the same way I do when I am in the office….actually I probably get more work done at home.

I don’t think we are going to see a 4 day workweek anytime soon, but 1 day per week of telecommuting is a step in the right direction. If US workers were to telecommute only 1 day per week, based on my crappy math, that’s an extra 82,200,000 Metric Tons of CO2 we save. Again…tough to visualize if you don’t know what CO2 looks like….but the average car weights around 1 Metric Ton. I’ll be working out of my home office tomorrow if you need me.