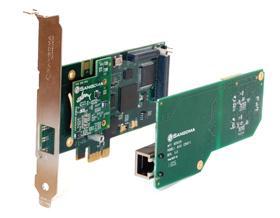 Sangoma announced today that they have released their highly anticipated A101D highly-compatible PCI and PCI Express card for use with Asterisk based phone systems and other open source telephony systems. The A101D supports the same digital processing as the company’s other popular AFT-based family of telephony cards. It provides the benefits of hardware-based echo cancellation and voice enhancement for smaller, single-port T1/E1 installations. The A101D also supports DTMF encoding/decoding and tone recognition, voice quality enhancement and adaptive noise reduction.

The A101D is set to have an MSRP of $1,000 USD and will be available through Sangoma distributors and resellers later this week.

The A101D is the world’s first single port T1/E1 PCI card with echo cancellation and is yet another instance of Sangoma driving innovation in the open source telephony PCI card space. With Sangoma building a loyal following due to there superior performance and ease of integration with multiple server platforms, the A101D is yet another product that will serve to further push Sangoma to the forefront of open source telephony PCI hardware.