Known for their long lasting, robust, and unique IP cameras, MOBOTIX has been one of the leaders in the IP surveillance market for years. Recently MOBOTIX standardized all their models to 5 MP from 3 MP and their latest leading update has been to their AllroundDual M15, which they utilized one of the dual lens modules with a thermal lens.

The new MOBOTIX MX-M15D-Thermal is an AllroundDual IP Camera perfect for situations that require a decentralized system in an environment that usually has poor visibility. A thermal camera is preferable when you need to know what is around the perimeter but visibility conditions make it hard to capture clear images on camera. The M15D-Thermal was created to detect hotter than average body parts or technical devices/overheated machines in complete darkness, through smoke, smog, or even thin plastic screens (not glass; thermal images cannot be detected through glass, so do plan accordingly). 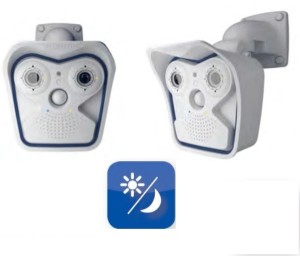 There are three models to choose from differing in lens ranges:

Who is it for?

The MX-M15D-Thermal is an ideal solution for docks, dispatches, and high-security or restricted areas where there may be limited visibility. The M15D-Thermal works when you need to know whether or not someone is moving in the dark, monitor for machinery over-heating, or detect ships on the horizon through hazy conditions. Trees, bushes, waves, and other natural barriers that disrupt visibility don’t trouble the M15D-thermal: you can block out “cold” objects whose movement causes disruption.

Unlike other thermal cameras, MOBOTIX has created the AllroundDual M15 thermal to also allow dual lenses pairing a thermal lens with a 5MP day or night sensor module lens. This ability for both thermal imaging and traditional imaging allows you to identify and monitor activities. If no traditional lens is used, the extra module space has a dummy lens in it to keep the M15D-Thermal watertight up to IP66-rated standards. For a no-nonsense approach to surveillance, a thermal IP opens all new options to choose from. 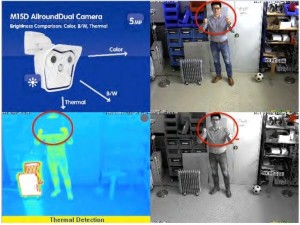 The MX-M15D-Thermal IP Camera is expect to begin shipping in late Q1.

Taylor is a former VoIP Supply Product Manager. As a published author under the pen name Whitney Taylor Shaw, I love writing. Especially in this field, it's exciting to always be exposed to new technology, the latest fads, and industry events. Along with the VoIP Supply Blog, I also write for SurveillanceInterpretation and enjoy interacting with other bloggers about their work. Follow me on Twitter, and connect with me on LinkedIn.
Tweet this Article
Share on Facebook
Share on Linkedin
Share on Reddit