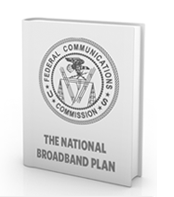 Criticism of this plan is growing explains Phil Britt of the Heartland Institute “as private businesses are already finding ways to provide quality wireless broadband without government intervention through partnerships between industry and telecom carriers.”

The birth of the U.S. railroad system, the engine of economic opportunity of its day, was largely funded by private interests focused on supplying transportation in areas that expressed demand.  Even the mighty New York Stock Exchange was founded not by government mandates but by private, opportunisitic merchants and brokers.

Recently I was asked by Britt if business should be left to develop broadband as the demand arises, rather than any mandates for broadband before there is a legitimate business case:

Wireless broadband is better served by private development, according to Nathan Miloszewski, communications manager for VoIP Supply LLC in Amherst, New York. He says mandating broadband stunts the growth of the technology used in conjunction with it.

“Allowing broadband to find its own path of least resistance ensures that future technological developments dictate how and where broadband is used, not the other way around,” Miloszewski said. “If broadband service is mandated, the hardware and software that’s used with it is no longer free to be based on consumers’ needs and wants. These developments will become pigeonholed into a one-size-fits-all approach to the type of service available.”

Miloszewski added, “For example, practical use of mobile Voice over Internet Protocol is still in its infancy. Emphasizing that broadband services cater to it now, before demand has been quantified, removes free will for the technology to develop organically. Mandating technology, service, or hardware results in solutions that satisfy few or none.”

Speaking from a VoIP hardware perspective I simply believe that our customers, we as consumers, are more than capable on our own of shaping the destiny of the services we need and the type of devices we enjoy using with them.