Nobody likes being told that if they want to use “x” phone system they have to use “x” phones.  When a decision maker hears that they have no choice in what phones they use, they seem to want a different type of phone just out of spite. It’s like going to a restaurant and seeing the words “No Substitutions” on the menu…

Luckily, Switchvox by Digium is an open sourced platform with an Asterisk core which allows you to use just about any SIP phone that will work with Asterisk. However, for people who breathe a little easier when their entire solution is single-branded, now Digium offers their own brand of phone that works seemlessly with Switchvox (and any other Asterisk deployment, too, but here I am talking about installing the phone with Switchvox).

So if you are deploying Switchvox for the first time, or are looking to add new phones to your current Switchvox deployment, there are good reasons to consider Digium phones. Time is money, so the most important reason would be how fast you can be up and running.

This is the most obvious reason you should consider Digium phones with your Switchvox system. Here at VoIP Supply, we have been running Switchvox for years.  When Digium released their phones, I brought 3 of them in house for testing. I have a Digium D70 here at my desk. If you have read my other posts you know that I am by no means technically gifted. However I was able to connect and configure my Digium D70 phone in less than 5 minutes.

When I removed the phone from the box, I attached the handset and the desk mount. I am pretty sure that attaching the desk stand was the hardest part of installation. I am not on a PoE switch, so I also ordered a Digium 5v power supply which I plugged into the D70. Then I unplugged the LAN connection from my Polycom IP550 and plugged it into my Digium D70.

At that point the backlit screen went to work. First it searched the network for a Switchvox server. Since we only have one, it defaulted to our server and said “Hey, is this the server you want?” – well, that’s not really what it said, but that’s what it meant. Of course I told it “yes”. 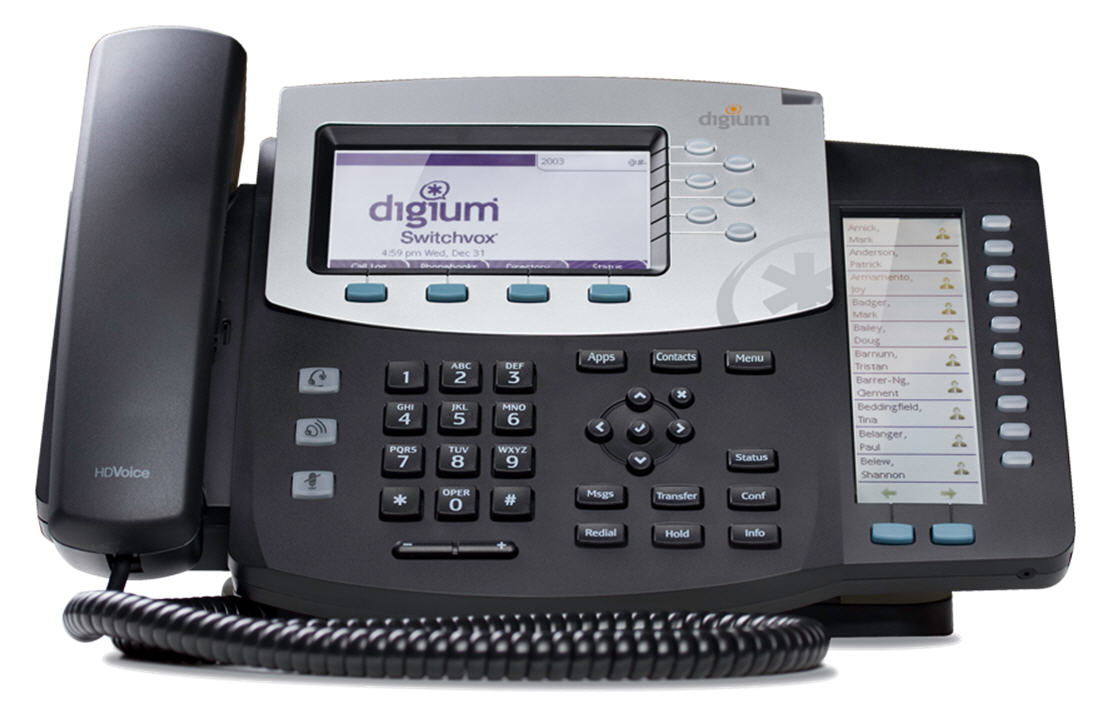 Then my entire company directory came up on the screen and the Digium phone asked me to choose my extension from the list. Easily enough, I scrolled down the list, found CHRISTINA SMITH, and hit SELECT. From that point the phone went through a firmware update that took about 3 minutes. The screen flashed and just like that I was up and running.  My phonebook from my Switchvox Switchboard was showing up on the rapid dial keys on the right hand side.

Then I had a little fun and reset my ringer from the ample choices that Digium gave me to assure maximum annoyance to my neighbors here in the office. From my Switchvox menu on my PC, I even uploaded a picture of my dog to use as the splash screen on the Digium D70 phone so when I am not on a call I can see something besides the Digium Logo. All in all, I was up and running without the support of an IT person in less than 5 minutes.

When doing a mass deployment, imagine the work hours that can be saved when each user can plug in and get up and running themselves without an IT person coming to each desktop.  In addition, the Switchboard gives your users maximum flexibility over what extensions occupy their rapid dial keys without having to type in the IP address of the phone, have an admin password, and know how to configure a phone. Even an entry level associate who knows how to use their Switchvox Switchboard can easily navigate preferences on their Digium phone.

Some Snags You May Encounter

Installation of the Digium D70 was super fast and easy, even without an IT person nearby…. once the Switchvox server was ready to accept new Digium phones.

Here are some snags you may come across and how to fix them.

Above are the few snags I ran into while installing and configuring my Digium phone with Switchvox. It was literally so easy that I was able to connect, configure and use the Digium D70 in less than 5 minutes.